These radio stars entered the podcast scene with a bang. On September 22, 2021, Spotify officially announced Tambalan Podcast and OnlyFun with Chico and Gino as the newest Spotify Exclusive podcasts under Podcast Network Asia. The streaming platform eagerly signed the two shows despite being relatively new in the podcasting world.

Before signing with Spotify, the cover art of OnlyFun says, “Not a Spotify Exclusive… Yet.” It’s as if the two have already manifested this to happen because now, they can finally change that banner to “A Spotify Exclusive.”

Chico Garcia and Gino Quillamor are former radio partners who talk about life and entertainment in their podcast, OnlyFun. To date, the show has 11 hour-long episodes where they share their opinions on random TV shows, and other shenanigans they thought of along the way. In their latest episode, they discussed the Korean Netflix series Nevertheless while utilizing Spotify’s Music+Talk feature.

They also call their listeners OnlyFans, which is a fun spinoff from the internet content subscription service of the same name. 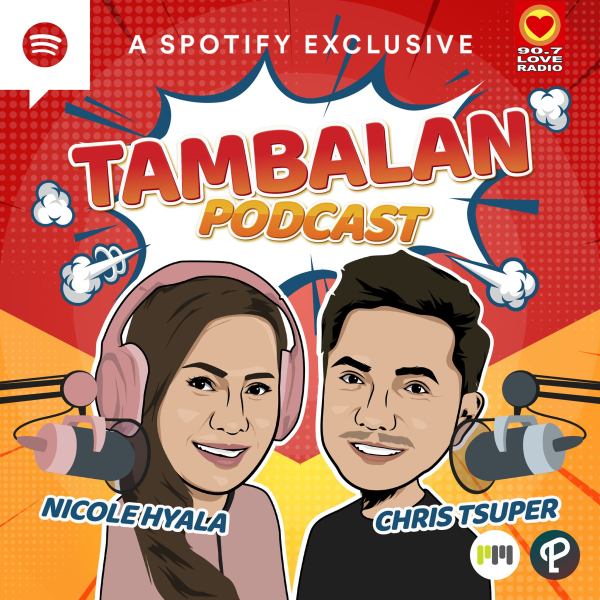 Just like Chico and Gino, another radio duo joins Spotify’s roster of its Exclusive podcasts. It’s none other than the balasubas-balahura tandem of 90.7 Love Radio, Nicole Hyala and Chris Tsuper.

In the past guest appearances of the two on Podcast Network Asia’s Walwal Sesh, Koolpals and Eve’s Drop, they revealed that audio is really their “forte.” As radio consumption decreased due to the rise of TV and digital, Nicole and Chris also made some gimmicks to increase their viewership on YouTube such as breaking raw eggs on their foreheads—all for the sake of clout. However, it still didn’t work out.

Now, with only less than 20 episodes under their belt, they’ve already topped Spotify’s top podcasts charts multiple times. Their episodes are also consistent in the Top Episodes charts, which fans can now exclusively stream on Spotify.

Tambalan Podcast and OnlyFun with Chico and Gino are now the sixth and seventh Spotify Exclusive shows under Podcast Network Asia. Boiling Waters, The KoolPals, Walwal Sesh and The Eve’s Drop signed in September 2020 while Punchline with Alex Calleja became exclusive in April 2021.