Last May 7, The KoolPals have moved from their usual recording studio and recorded a live podcast episode at Music Museum in Greenhills.

The group had been planning for a big show for quite some time now; they just had to put everything on hold because of the pandemic. After two years, they missed interacting with people and being on stage. And on May 7, the boys filled Music Museum with laughter and applause—something they missed hearing during lockdown. 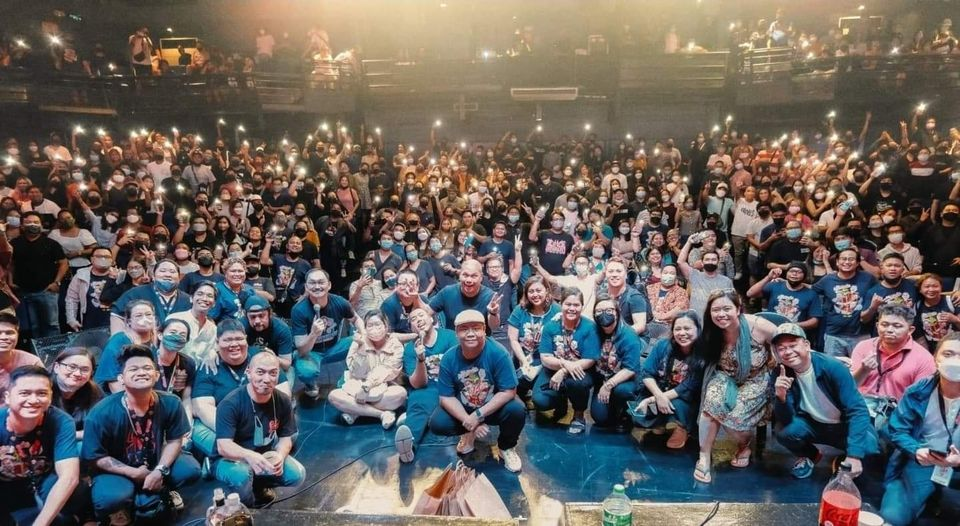 Other fans also greeted The Koolpals a happy anniversary, and congratulated them for a successful live event.

The making of the physical event

“At first, we were just looking for a bar we can do a series of meet and greet comedy shows for the KoolPals,” GB Labrador says. “Unfortunately it was hard to secure a date that will fit everyone’s schedule.”

The group has been busy individually. James has been juggling his acting and comedy gigs on top of his day job as an IT programmer, Nonong has been busy taping for the show “Ang Probinsyano,” and GB has been busy at home, being in charge of his family’s laundry, cooking, and taking care of two kids. Still, the group of friends persisted and found a way.

Instead of having a series of shows, The KoolPals decided to do a live event in a big venue due to their busy schedules. On deciding on the date of the show, James suggested that they do it in May to celebrate The KoolPals’ anniversary.

The venue of this event, the Music Museum theater in Greenhills, can accommodate a little over seven hundred people. After posting about the event, all the tickets to their live show sold out in a week. They were elated, to say the least.

“This is so far the fastest time a show got sold out in Comedy Manila history. 700 tickets sold in 5 days. That’s why we’re also giving 5 days to prepare for the show.”

They were also recording it for a special episode for their podcast, making them the first in the Philippines to do a live recording of a podcast.

“We can’t wait to hear the instant reaction and comments of our listeners during the live recording. Hearing them laugh and enjoy the conversation during the recording will fulfill our ‘long table inuman’ discussion moment that all KoolPals have been waiting to experience live.”

The group prepared a live sketch comedy; a Live Stand-Up comedy featuring the best of KoolPals Open Mic and Comedy Manila; and they ended the night with the live recording.

“This event is not just a celebration for The KoolPals podcast, but also a celebration of Philippine comedy as we showcase the up-and-coming standup comedians and the comedy writing and acting of our hosts on stage.”

When asked about what they would like to say to their fans and supporters, the comedic bunch say that they are forever grateful for the koolpals that keep pushing them to work harder, to be funnier, and to keep dreaming big.

“Every day we are grateful for the kind of love and support we are getting from the KoolPals. Pepepepepem!”